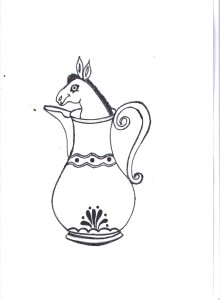 The mule is in the pitcher!
by Muna Zaki

Who could say that the mule is in the pitcher?

This proverb is said to imply that a person cannot say the truth because he is afraid of the consequences. There is a story behind it:

There was once a judge who passed an unfair verdict that a man should be given 60 lashes and fined 60 pounds. The hapless man was forced to accept the judge’s sentence. He went out after the execution of the verdict filled with anger and resentment that he was unable to discharge. On his way, he met a genie that saw the signs of rage on his sullen face. When this genie asked what the matter was, the man told him about the unjust sentence passed by the judge.

The genie replied, ‘I could take your revenge from that judge and he will be flogged 600 times instead of the 60 lashes he gave you. And instead of the 60 pounds he fined you I will make him pay you 6000 pounds. What do you think about this?’

The oppressed man readily agreed to the genie’s suggestion. In the flash of an eye, the genie was transformed into a very handsome baghla (mule).

Now the judge was well-known for being passionately fond of mules. Knowing this the genie suggested that the man should sell him (as a mule) to the judge for the set price of 6000 pounds.

The man led the mule around the village until he passed by a group of people amongst whom was the judge. As expected, the judge admired the animal and asked the man to sell it to him. The man followed the genie’s advice and asked the judge to pay 6000 pounds. The judge agreed to the exorbitant price because the mule was an exceptionally fine one. From that time on, he rode the mule wherever he went, and bragged to everyone that he had the finest mount in the district.

One day, the judge was making his ablutions while the mule was standing before him. The judge was looking in admiration at the animal when something unbelievable happened before his eyes. The mule was sucked down into a jug being used for the ablutions. The terrified judge started to scream madly, ‘The mule is in the pitcher! The mule is in the pitcher!’

People hurried to him to ask what was wrong. When he told them that the mule was in the pitcher, the people looked inside but only saw the water. They tried to convince him that it was just his imagination but the judge swore by his faith that the mule was in the pitcher. Naturally the people thought that this was absurd and began to scoff. ‘Couldn’t the judge see the mule standing before him?’ they asked incredulously.

The people thought that the judge had become mad so they took him to a religious sheikh to seek some treatment. The judge tried to convince the sheikh that the mule really had gone inside the ablution pitcher but to no avail. The sheikh was convinced that the bedeviled judge had completely lost his mind. He stared to flog him hysterically with his whip but even then the judge continued to scream, ‘The mule is in the pitcher! The mule is in the pitcher!’ until he lost consciousness. When he regained his senses, he found his mule standing in front of him. Then the people asked the judge where his mule was. He pointed to the mule before him and it seemed to everyone that he had been healed from his madness. However, as soon as the judge was alone with his mule, it returned back to the pitcher and the judge started once again to shout and scream madly. The people took him back again to the sheikh who flogged him violently. This situation continued for a long time with the judge being beaten each time he relapsed into apparent madness.

One day while the judge was making his ablutions, the mule slipped inside the pitcher and looked up at him. The judge laughed and quietly addressed his mule by saying, ‘I see you but who could say that the mule is in the pitcher?!’

One thought on “Who could say that the mule is in the pitcher? (an Arabic Proverb commonly used in the Sudan)”