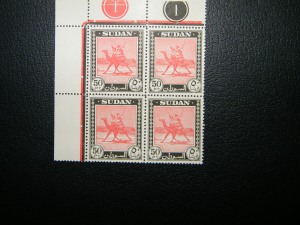 The original design of a camel postman was by a Captain E.A Stanton of the Royal Engineers in 1896. Years later he recounted the circumstances that led to creation of the stamp in an article republished in Sudan Notes and Records from which the following is a summary: apparently Stanton had added sketches to the maps used during the conquest of the Dongola area and these had come to the attention of the Sirdar of the Egyptian Army, Sir Herbert Kitchener or K as he was known by his men. In a typically curt manner he gave Stanton a mere five days to come up with a good design. Three days passed with Stanton becoming increasingly worried until the post arrived on a camel instead of a steamer. This caught Stanton’s imagination and he immediately asked the sheikh of the Howawir to ride up and down for him on his camel with bags of straw attached to imitate the bulging mail bags.  Not surprisingly Kitchener expressed approval of the design in his own understated manner: “That’s not too bad; that I think will do -Good morning.”

It is the oldest, and most well known, of all Sudanese stamp designs having been first used in the town of Berper in March 1898. Not only are the stamps a great design, they illustrate the fact that mail was carried by camel well into the 1950s. For instance in the Northern Province , the post was transported to Karima on a railway travelling post office and then carried on to Merowe by camel. In Darfur mail was taken from Al Fasher to Al Geneina by weekly camel or by motor transport as opportunity offered.

These 50 pts (piasters) stamps of a camel postman coloured red in a black frame were in use up until the 1960s. The design was also copied on the first Sudanese coins and bank notes in the early years of Sudanese independence. Since then it has become the logo for the French  Sudanese Bank but strangely enough it doesn’t seem to have been used much by the Sudanese Post Office.

One thought on “The camel postman”